I am afraid I have not been totally honest with you, my faithful readers.  I look back on many posts and see things that have literally been sugar coated; made pretty for the camera, better than they truly appear in my kitchen.  This cake slice is a perfect example. 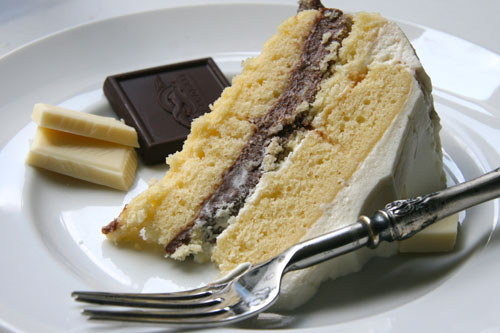 My little sweets are like those Barbie Doll actresses or newscasters who have had hours of make-up applied to them, who are straight off the plastic surgery assembly-line with perky boobs, line-free foreheads and teeth whiter than any snowcapped mountain. 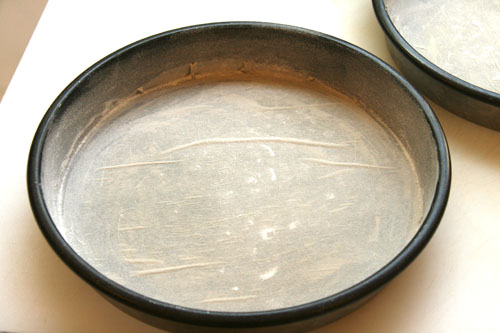 I primp, throw on accoutrements to cover-up blemishes, add a chocolate or two for interest and color, tilt it to show its good side, and then snap, I capture beautiful fakeness and you are left to try to mimic something that does not actually exist.

Many times, I have been known to succumb to the photo editor’s mentality who must Photoshop a cover model’s non existent waistline to appear even smaller, carving out another inch of nothingness. 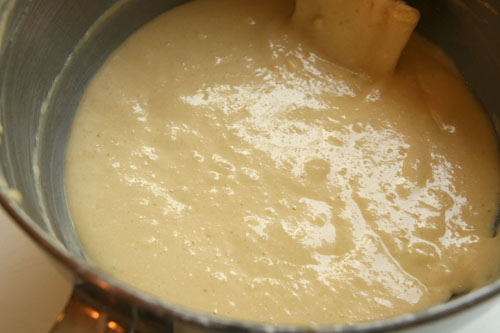 Well, not today folks.  Here, I give you my totally ugly, real as can be, Black and White cake.  It’s not a pretty sight.  I am aware.  As I tried, oh-so-carefully to cut the delicate layers in half so that I could have a four layer cake, chock full of gorgeous fillings, my layers became cake shavings and I was left with two hefty layers and two see-through layers with giant gaping holes in the center.

As I felt more than a little dejected, beating the white chocolate whipped cream frosting into oblivion (and swiping a finger dipped taste-test), I contemplated making a new cake for my guests tonight and, of course, for the camera. After all, how could one photograph or serve this monstrosity? 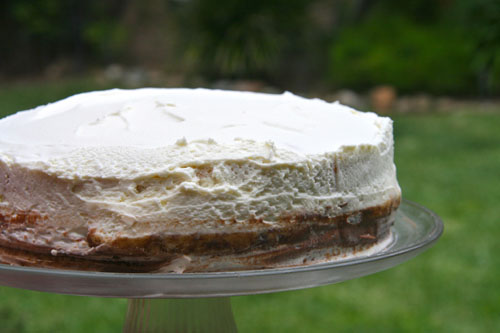 But then it occurred to me, as I licked my lips and uttered, “Mmmmm,”  this is real life and you people are real readers who have cake disasters that you’ve had to recover from. We all have had celebration cakes that look more like a demolition site than a show piece for an event.  Well, here’s to those days and those cakes and to life and food not always being exactly how the recipe prescribes.

So here is my cake, with layers that are big and small, thick and thin and white chocolate whipped cream frosting that accidentally melds in with the bittersweet chocolate custard-like filling.  And as I nibble the delicious vanilla flavored crumbs and lick the left-over spatula covered in chocolatey splendor, I feel reassured that substance is what counts and also am grateful that not all cakes are utter disasters.

*Disclaimer and review: See my comments below the recipe.

Getting Ready: Center a rack in the oven and preheat the oven to 350 degrees F. Butter two 9 x 2 inch round cake pans, dust insides with flour, tap out the excess and line the bottoms of the pans with parchment or wax paper.

To Make the Cake: Sift together the cake flour, baking powder, baking soda and salt.

Working with a stand mixer fitted with a paddle attachment, or with a hand mixer in a large bowl, beat the butter on medium speed until soft and creamy. Add the sugar and beat for another 3 minutes. Add the eggs one by one, and then the yolk, beating for 1 minute after each addition. Beat in the vanilla; don’t be concerned if the mixture looks curdled.

Bake for 28 to 30 minutes, rotating the pans at the midway point. When fully baked, the cakes will be golden and springy to the touch and a thin knife inserted into the centers will come out clean. Transfer the cakes to a rack and cool for about 5 minutes, then unmold, remove the paper and invert to cool to room temperature right side up on the rack.  Once cooled, wrap the cakes tightly in plastic and refrigerate for a couple of hours to firm up.

To Make the Dark Chocolate Cream:
Bring the milk to a boil.  I put the milk in a liquid measuring cup and heated it in the microwave on high for one minute and then one minute again.

Meanwhile, in a large heavy-bottomed saucepan, whisk the egg yolks with the sugar, cornstarch and salt until thick and well blended. Whisking without stopping, drizzle in about 1/4 cup of the hot milk–this will temper, or warm, the yolks so they won’t curdle–then, still whisking, add the remainder of the milk in a steady stream. Put the pan over medium heat and, whisking vigorously, constantly and thoroughly (make sure to get into the edges of the pan), bring the mixture to a boil. Keep at a boil, still whisking, for 1 to 2 minutes. Remove the pan from the heat.

Whisk in the melted chocolate, and let stand for 5 minutes. Press a piece of plastic wrap against the surface of the cream to create an airtight seal and refrigerate the cream until chilled, or for up to 3 days. Or, if you want to cool the cream quickly, put the bowl with the cream into a larger bowl filled with ice cubes and cold water and stir the cream occasionally until it is thoroughly chilled, about 20 minutes.  I honestly didn’t let my cool more than an hour and it was fine.

To Make the White Chocolate Whipped Cream:
Put the white chocolate in a heatproof bowl and put the bowl over a saucepan of gently simmering water. Stir frequently to melt the chocolate evenly. Meanwhile, bring 1/2 cup of the heavy cream to a boil (again, I did this in the microwave for convenience).

When the white chocolate is melted. I needed to vigorously whisk the chocolate over the hot water in order for it to adequately melt smoothly. Remove the bowl of white chocolate from the heat.  Pour the hot cream over the melted chocolate and let it sit for a minute. Using a small spatula, stir the chocolate gently until it is smooth. That is Dorie’s advice and my advice is to whisk it into oblivion.  That was the only way I could get it smooth. Let it sit on the counter until it reaches room temperature–it can’t be the least bit warm when you add it to the whipped cream.  I transfered it to a cool bowl and let it sit out for a whole hour before I added it to the whipped cream.

Working with the stand mixer with the whisk attachment or with a hand mixer in a large bowl, beat the remaining 1 cup heavy cream only until it holds the softest peaks. Turn the machine to high, add the cooled white chocolate all at once and continue to beat until the whipped cream holds firm peaks. Turn the whipped cream into a bowl, press a piece of plastic wrap gently against the surface to create an airtight seal and refrigerate for at least 2 hours, or up to 6 hours.

To Assemble the Cake:
Take the cake layers out of the fridge. If the tops of the cake layers have crowned, use a long serrated knife and a gentle sawing motion to even them. Slice each layer horizontally in half. This is where I had my problems and had the cake layers fall apart. I decided to piece them back together when frosting the cake and it worked better than I expected.  Place one layer cut side down on a cardboard cake round or on a cake plate protected by strips of wax or parchment paper.

Refrigerate for at least 3 hours, or overnight.

*In my humble opinion….My family and I thought this cake as a whole slice was delicious.  The white chocolate whipped cream frosting was memorable and delicate. The cake part was a tiny bit tough if you ask me, but I like my cakes spongy.  In the future, I would add an extra entire egg instead of just the egg yolk as required by the recipe.  I might also add  1/4 c. of canola oil.   This is a labor intensive cake and deserves to be made in two days.  Cake on day one and fillings and frosting on day two unless you have a good portion of the day to devote to it.  One last final thought…I would definitely make it in three 9 inch cake pans instead of trying to cut two layers in half.  I don’t think there is enough chocolate filling to frost two separate layers adequately.  My cake seemed to work rather well with one, nice thick layer of the chocolate cream filling and one layer of the chocolate whipped cream frosting.

35 thoughts on “Imperfection and a Black and White Cake”