Slow down. Has life been more than amped up lately? Are you running late wherever you go or are you being pulled in a hundred different directions? I hear ya. You are preaching to the choir. But one day soon, Saturday perhaps, you should just slow down and make this Banana French Toast. Or better yet, if you have kids, surprise them and set it out on the table on a SCHOOL DAY! 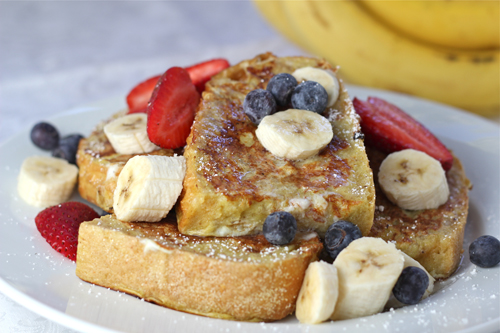 This recipe is a family favorite. I was a very lucky child growing up. Most mornings, I was served a hot breakfast of Banana French Toast, or an egg-y “Bubble” or some other equally delicious thing that was coming off my mother’s stove. I know that is rare, and that my life was and is blessed. My mom knew how important it was to start a kid’s day off right; with sunshine and bananas and the knowledge that you are loved.

After all, the onslaught of the day would hit us soon enough, and if we got to start our day with a smile and a warm breakfast, that would cushion life’s blows as they came our way on the school playground or in the classroom.

We always think that we, as parents, are facing SO MUCH. We are. I am the first to understand that little tidbit of information, BUT our kids are usually facing their battles as well. Trying to get along with friends or protecting themselves from bullies, trying to please teachers, just getting through the next math test and finding a place in the lunch area where they feel like they belong, that is a lot.

And if you are a teen, I think it’s even worse. You are being hit from all directions. Texting is never ending, and friends and parents can get a hold of you at any given minute. Don’t you remember what it was like to “go off the grid” as a teen…when there were no cell phones and your parents just had to rely on you telling them where you would be? I think there was a little air of mystery and freedom that we enjoyed as teens that has gone.

Teens are never off the grid anymore. They are on everyone’s grid…especially with Facebook, where one, little mistake or heartbreak can get blasted to hundreds of “friends”. Can you imagine if your little love notes you passed in fifth grade to the boy or girl at the next desk, were then brandished all over the social network?!! 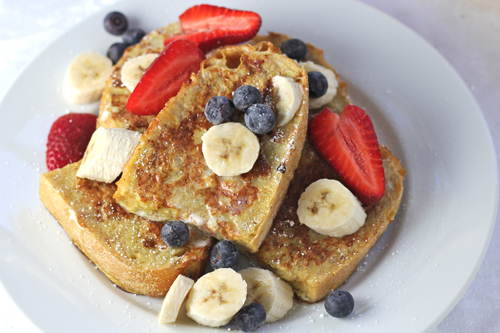 I don’t think they quite know what is making them so anxious and stressed out, but I think their lives are just too complicated “these days” (I do know how old I sound, sigh). Our kids have it kind of rough if you ask me. And maybe, just maybe, a nice, hot breakfast would at least start the day off right and give them a little armor. We can show them that they are loved and they belong—at least  at their own kitchen table—and that they are very, very special even if the world tells them otherwise.

Makes about 10-12 thick-cut slices of French Toast
Ingredients
Makes about 6 thick-cut slices of either preferably day-old Challah (best French toast bread ever) or French or Italian Loaf. Sandwich bread is fine but does not make as hearty a French Toast as bakery breads do.
4 large eggs
1/2 c. of whole milk or half and half
2 overly ripe banana
1 t. natural vanilla extract
1-2 t. cinnamon sugar (if you have some mixed or mix together in small bowl 1  3/4 t. sugar and 1/4 t. cinnamon)
About 1 T. of Canola oil and a pat of butter for the pan
Powdered sugar for dusting and fresh fruit such as sliced bananas, blueberries and strawberries for toppings.
1/3 c. toasted and roughly chopped walnuts for garnish if you like

To make the French Toast: First crack your eggs, one by one into a liquid measuring cup, pouring out each one into a shallow baking dish or pie plate (big enough for two slices of bread at least). Scramble your eggs with a fork. Add the milk, and combine with the fork.

Now is a good time to heat up your griddle. I like to put a pat (about a tablespoon) of butter and a tablespoon of Canola oil on the pan and turn it on medium heat. As the butter melts, use a paper towel to rub the melted butter and oil over the entire pan. Do no catch your paper towel on fire or burn your fingers. You can also use a basting brush if you would rather, but for me the towel works best.

You eventually need the griddle hot enough to cause it to sizzle when your drop a smidgen of batter on the outskirts of the pan, but not so hot it will burn on impact or burn ever. Let it continue to heat up while you finish the French Toast.

Put your ripe bananas in the dish with your egg mixture and mash with the fork right in the dish, leaving very small chunks of mashed banana in the dish. Add your vanilla and cinnamon and beat, mixing together with a fork, until all of the ingredients are well combined.  Take two-three slices of bread at a time and let one side sit in the egg mixture for about 30 seconds or until amply soaked in. Flip and soak the other side.

Place the slices on your hot griddle. Flip after a minute or so; you can peek with the spatula and see if it looks golden. I end up flipping a couple of times during the process and gently pressing down on the semi-cooked French Toast with my spatula so that any uncooked crevices are forced to touch the pan and cook. Unlike pancakes, this will not toughen them up.  I also like to slide each slice to the edge of the pan after cooking both sides and try to cook all edges of the slice so the thick ends are not uncooked and batter-like. If you are not working with a griddle which as flat-ish sides, you may want to stand up your French Toast on the four sides, letting each side that looks uncooked get cooked.  This gets the top and bottom and all of the edges nice and golden.

Start the process again until all of your slices are cooked. Serve with warmed syrup (add banana rum to your syrup if you want an added kick for the adults in the group) and dust them with a little powdered sugar. Top with fresh fruit and perhaps some roughly chopped toasted walnuts.

This work is licensed under a Creative Commons Attribution-NonCommercial-ShareAlike 3.0 Unported License.
Join 7,718 other followers