My very favorite thing I love about baking is creating something new. Not new to the world mind you…I don’t know if there’s anything that really hasn’t been done…but new to me. My own invention. I love playing mad scientist with my spices, extracts and various fruits in season. 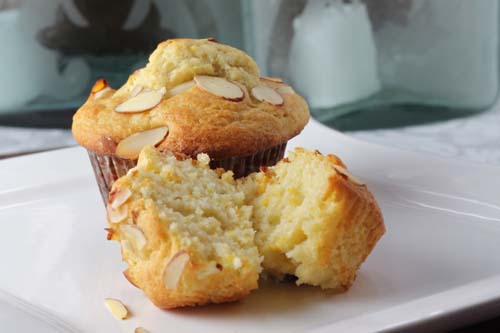 This morning I woke up with that craving to invent, not follow a recipe, and haughtily threw caution to the wind. When I am being adventurous, sometimes it works and sometimes it doesn’t. Muffins are the world’s easiest item to play crazy scientist with. They are fairly forgiving.

And if you haven’t been around these parts since way back in the dark ages of my blog (February of 2010), then you may have missed my “Create Your Own Muffin Template” post. At the time, I thought I was pretty ingenious and practically danced around the kitchen when I discovered a recipe that can be swapped out and in with whatever’s in the cupboard, fridge or in my head. Truthfully, I didn’t know at the time just how much fun it would be. It’s like one of those make your own yogurt bars where the toppings are endless.

So as summer is rounding the corner, I thought of peaches and blueberries and wouldn’t you know it, I had a handful of berries, and actually some frozen sliced peaches and just went for it today. I definitely was in the “throw everything in but the kitchen sink” mentality. I swapped in coconut oil for canola oil —WINNING!— pureed peaches for the usual apple sauce, almond extract instead of vanilla and a little freshly grated ginger went in…just because.

These peach muffins turned out sunny and glorious, and I was one very happy camper. The texture was spot on, the surprise hits of ginger and notes of almond were warm and inviting and I can’t help it, I got a little giddy when my spur-of -the-moment creation came out lightyears better than I ever had imagined. So humble, I am aware.

As you can see from my photo, I played around with various toppings trying to decide which I liked best. My daughter and I agreed that the blueberry cream cheese topped muffins were DIVINE but rather horrific looking, and I, personally, like the sliced almond topped ones the best for both taste and visual appeal. 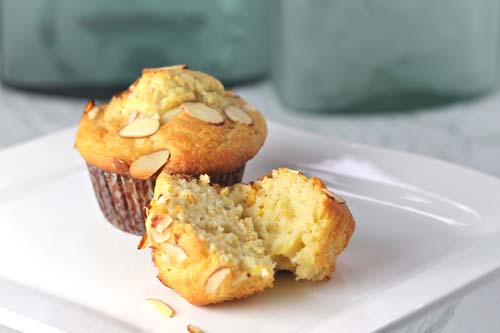 If peaches and blueberries aren’t in your kitchen, then use my “create your own muffin template” and throw in what’s hanging out at your house. Be creative, go crazy, and you may just get to impress yourself too. After all, if you can’t impress yourself, who can you impress?

BTW…if you read this thoroughly and have been playing “Where’s Waldo” with the blueberries, you may be disappointed. There were literally like five blueberries added to the mix, but I thought, “Why not?”, the lucky winners who get the blueberry studded ones will feel quite special. 😉

—Just a reminder, if you don’t want to be spammed and flooded with the thousands of comments that pour into Sweet and Crumby, please UNCHECK the box that says, “Notify me of future comments”. Okey dokey?

An S&C Original Recipe
Makes about a dozen muffins (mine actually made eleven but that sounded weird)
1 1/2 c. all purpose flour
1/2 c. almond meal (you can use more all purpose flour if that’s what you have)
1/3 c. granulated sugar
1 1/2 t. baking powder
1/2 t. baking soda
1/2 t. salt
1/2 t. dried ground ginger
2/3 c. pureed peaches (I pureed defrosted slices in the Cuisinart…you can use freshly peeled peaches (1 large or 2 sml) and puree those instead.
1/2 c. + 2 T. milk (buttermilk would be fab)
1/4 c. coconut oil (melted) OR Canola Oil would be fine
1 T. agave nectar (or honey)
1 egg
1/2 t. almond extract, natural (vanilla would work too!)
1/2 t. grated fresh ginger, optional
2/3 c. diced peeled peaches ( about 2 small ones, and small pieces work best for baking)
1/2 c. blueberries
Toppings: I used pinches of turbinado sugar (regular granulated sugar is fine too) for some and toasted sliced almonds for others.

To make the muffins: Preheat your oven to 400 degrees Fahrenheit and line your muffin pan with liners.  In a large mixing bowl, whisk together flours through salt.

In a medium mixing bowl, beat together pureed peaches through egg. Then add the liquid ingredients to the flour mixture, 1/2 at a time, stirring in between to incorporate.

In a small bowl stir diced peaches and blueberries with 1 T. of all purpose flour. This will help your chopped fruits float in the muffins instead of sinking to the bottom. Gently, stir your fruits into the batter. Using a large icecream scoop, scoop the batter into the prepared liners.

Top with either a pinch of Turbinado sugar or sliced, toasted almonds or both…go crazy!  Bake for about 20-25 minutes or until golden on top, just barely firm to the touch and tooth pick is clean, however sometimes the toothpick test is difficult when working with fruited muffins. Just go with the touch test if I were you.

Enjoy these with a glass or orange juice or nice cup of coffee because they are just that much better that way.