A Sweet and Crumby Instant Replay because sometimes Life happens.

Have you ever fallen…

down, way down, with no glimpse of the sky?

literally, into a mud puddle, or down a flight of stairs or simply between the cracks?… 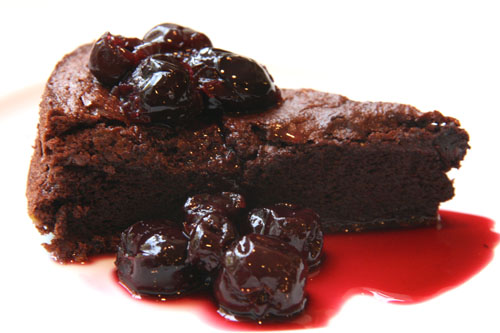 This devastatingly rich, chocolate cake, too, has fallen, but it was designed to fall. Cakes are one of those few things that can be meant to fall.  Unlike people, this cake falls perfectly into a rich and soulful plate of splendor. 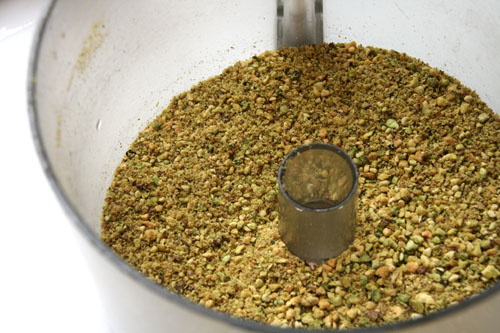 Its sunkeness was planned and executed, not a shock. Maybe that’s the crux of a bad fall…the catch us off guard and pull the ground out from under us kind of thing. Ones that sneak up on us from out of nowhere just may be the worst of all.

Falling, though awful, may give us a chance to grow.  After all, everyone falls, but it’s how we pull ourselves back up that says so much about who we are now and who we are becoming. 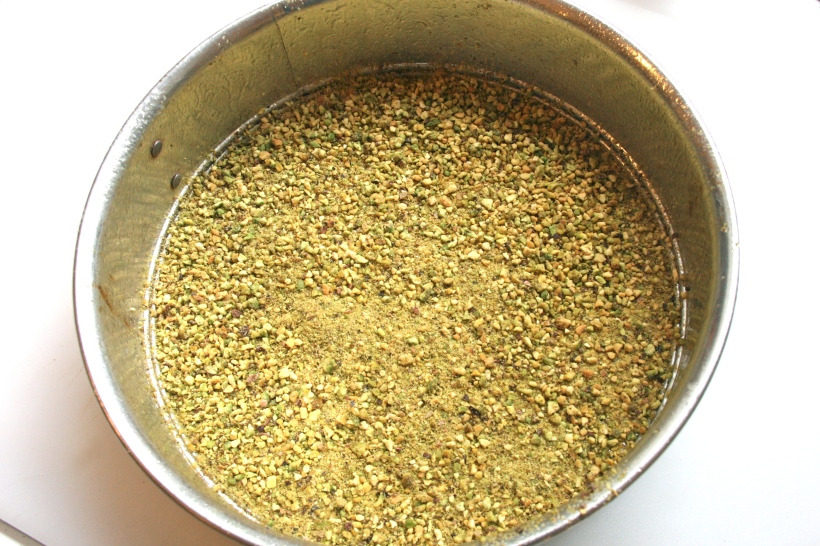 When we fall, if there’s a hand there, a good strong hand that can pull hard and lift us up from the ground, carefully wash our wounds and stick on bandaids, then maybe falling has its place.  A place that can actually make us feel quite secure as ironic as that sounds. 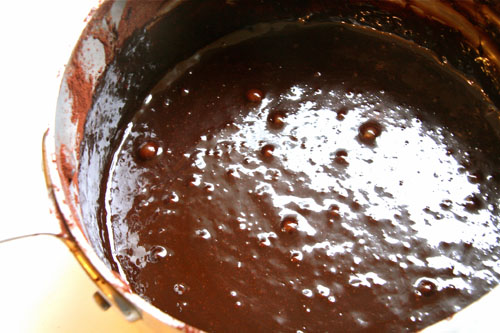 But maybe falling isn’t only about the one who falls.   Falling might just also be about those around after the fall. Those from the places you least suspect who dive in and glue the broken pieces together.  Falling might just give someone a chance to be a hero. 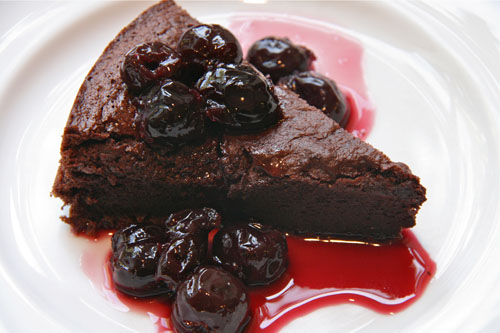 Yeah, the cake would have been fine on its own after it fell; it is made from ridiculously good chocolate after all.  But for once, the sauce, the beautiful glistening dark balsamic cherry sauce, gets to be the hero as it oozes between the cracks and glosses over any wounds.

Fallen Chocolate Cake with Balsamic Cherry Sauce
Adapted from Cooking Light (yes, friends it only has 262 calories and 6.6g. of fat!)
Serves 12
1/2 c. shelled pistachios
cooking spray
1 1/4 c. granulated sugar divided
1/4 c. water
4 ounces bittersweet chocolate, best quality you can get your hands on.
1/4 t. sea salt
1/2 c. unsweetened cocoa, the better the chocolate the better your cake…trust me.
3 large eggs, lightly beaten
1/2 t. vanilla extract
optional: 1/8 t. almond extract (I did not use it and liked it the way it was)
4 large egg whites (yes 4, not a type-o)

Balsamic Cherry Sauce
Inspired by Cooking Light (the original sauce calls for red wine instead of water…I think port would be magnificent, but I chose to use water and balsamic vinegar in a very small quantity and it was lovely)
2/3 c. granulated sugar
1/2 c. water
1 T. balsamic vinegar
1 lb frozen dark, pitted cherries

For the Cake: Spray a 9 inch spring-form pan amply with cooking spray, then cut a perfectly fitted circle out of parchment paper to  line the bottom (I trace around my pan and then cut the paper).  Spray the parchment as well, now that it’s on the pan.

Put the pistachios in a food processor and whir to oblivion, leaving a fine crumb of pistachios.  Gently press your pistachios into the bottom of the pan, on top of the parchment.

To make the batter, in a  medium saucepan combine 1 c. of the sugar, and the water and bring to a boil, stirring to dissolve the sugar.  Remove from heat; stir in bittersweet chocolate and salt.   Stir until the chocolate is completely melted.  Add cocoa, stirring with a whisk until well blended.  Add the 3 whole eggs, individually, whisking in between each egg addition.  Stir in extracts.

In the bowl of a stand mixer fitted with a balloon whisk, put in the four egg whites and beat first on medium then on high until stiff peaks form.  As the peaks are beginning to form, gradually add the 1/4 c. of sugar one tablespoon at a time. 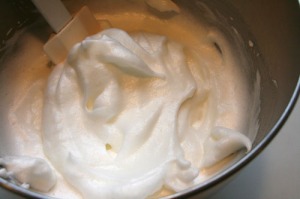 Once the stiff peaks form, fold 1/4 of the eggwhite mixture into the chocolate mixture and repeat until all of the egg whites are incorporated.  Pour mixture into prepared pan.  Bake at 350 degrees F. for about 25 minutes or until a wooden toothpick inserted in center comes out nearly clean.  You will have some batter on the toothpick since this cake is meant to have a texture that is a cross between a flourless cake and a touch pudding-y.

Cool to room temperature; run a kinfe around the outside edge and remove from the pan, gently upside down onto a wire rack.  Peel off the parchment paper and invert again onto a serving plate so it is now right side up.

While the cake is cooling, make the sauce.  Combine the sugar, water and balsamic vinegar in a medium saucepan, stirring to dissolve sugar.  Add the cherries and bring to a boil, reducing the heat once it boils and simmer for about 10-15 minutes or until the mixture reduces to about two cups.  The sauce can be used to ladle over each slice of cake upon serving.

This work is licensed under a Creative Commons Attribution-NonCommercial-ShareAlike 3.0 Unported License.
Join 7,718 other followers