Hi All— For those of you who have been loyal followers since last July, you are aware of a few re-posts.  I have been away basking in the Kauai sunshine, rain and ocean air with my family. Of course, eating was a huge part of my vacation, and I will be featuring some crazy amazing Island foods (Haupia Pie! —Coconut pudding, chocolate pudding and whipped cream on a Macadamia shortbread crust) that I have eaten over the last week and am determined to replicate so stay tuned…new posts are coming soon.

Sometimes, I wake up in the morning with a clear thought of what I am in the mood to make (and eat).  For example, one Sunday I woke up and thought, “I MUST make doughnuts.” And if you are going to bother with the the huge vat of oil, wait for the dough to rise and eat a ginormous amount of calories, then you may as well jump in with both feet and make Maple Glazed Doughnuts topped with Applewood Smoked Bacon crumbles.  Don’t you agree? 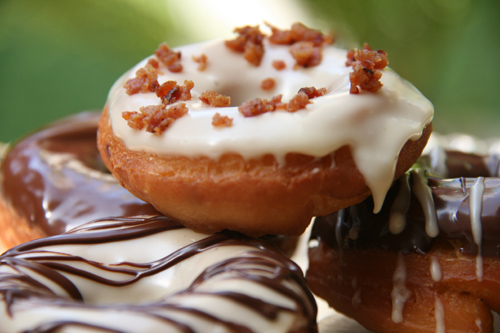 I am one hundred percent certain if Han Solo were a doughnut he would be that one right there below which has been dipped in chocolate, then maple glazed and with a finale of freshly cooked bacon crumbs sprinkled on top.  Ok…my mind has always been suspect at best, and now you have just made a positive diagnosis for me as certifiably insane.  That’s Ok…I’m cool with that—really.

You see, these doughnuts were first requested by my husband, and he is a STAR WARS FREAK! I will get to the doughnut association later…be patient.

To answer your questions (if you didn’t have any, please play along anyhow) : 1) Yes, he does actually go to those Star Wars Conventions 2)No, he does not own a Storm Trooper Suit 3)Yes, he DOES own several Star Wars themed clothing pieces (One Boba Fett hoodie, One Yoda Hoodie, etc.) and 4)No I have not acquiesced to wearing THE GOLD BIKINI or having a SW themed bedroom for us so instead he has a SW themed office at work.  Win-win for both of us, wouldn’t you say?

Back to the doughnuts—When glazing these beauties, the whole family pitched in.  My daughter, in a manner much like any professional chocolatier, was dipping some of the donuts in melted bittersweet chocolate, I was spreading on the maple glaze and my husband was in charge of the bacon.  Next thing I know, my husband is on a mission to make an EPIC DOUGHNUT as he put it.  He dipped one in the melted chocolate, refrigerated it for about 10 minutes so the chocolate could firm up, then spread maple glaze over it and finally sprinkled on the bacon crumbles.

It was an EPIC Doughnut indeed, and what is the first thing any normal person associates with the word EPIC but STAR WARS of course (maybe he has rubbed off on me!).  And then it dawned on me, this doughnut is just like Han Solo.  No, I did not see his likeness in the doughnut like those famous Virgin Mary Cheetos that they are auctioning on Ebay.

Instead, I saw the bad-ass bacon crumbles opposing the sweet maple glaze, a sweet and salty irony, much like Han himself and the dark, smooth sexy chocolate.  I mean what woman didn’t want a little nibble of Han Solo (or chocolate for that matter)?   And underneath everything complex on top was just a basic, sturdy doughnut— one you could count on in a pinch.  Didn’t he come through for Princess Leia each and every time?

If you are in need of a reliable doughnut recipe and have a hankering for something deliciously salty and sweet, rich and soft…then make these doughnuts, or make it simpler and just rent Star Wars and stop by the local doughnut shop. You will not be disappointed either way.

P.S. Ok…I had one more cool pic of my very sexy doughnuts.  My husband, the graphic artist, drizzled chocolate over the maple glaze in that pic there.  It looks so cool and zebra striped.  Who would that doughnut be like?  Any ideas?  Please comment.

To make the doughnut dough:
Stir together yeast and warm water in a small bowl until yeast is dissolved. Let stand until foamy, about 5 minutes (If yeast doesn’t foam, discard and start over with new yeast.)
Combine flour, milk, butter, yolks, sugar, salt and cinnamon in mixer bowl, add yeast mixture, and mix at low speed until a soft dough forms. Increase speed to medium-high and beat for 3 minutes.

Scrape dough from sides of bowl into center and sprinkle lightly with flour, to keep a crust from forming. Cover bowl with a kitchen towel and let dough rise in a warm draft-free place until doubled in bulk, 1-1/2 to 2 hours. Alternatively, let dough rise in refrigerator for 8 to 12 hours. 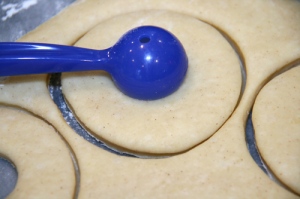 Cover doughnuts with a kitchen towel and let rise in a warm draft-free place until slightly puffed, about 30 minutes (45 minutes if dough was refrigerated).

Heat 2-1/2 inches oil in a 4-quart deep heavy pot until it registers 350F on thermometer. Fry doughnuts 2 at a time, turning occasionally with a wire skimmer or a slotted spoon, until puffed and golden brown, about 2 minutes per batch. Transfer to paper towels to drain. (Return oil to 350F between batches.)  Allow to cool completely before glazing. 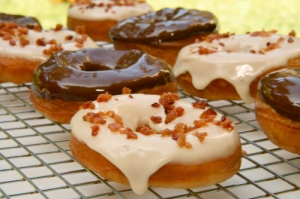 To glaze, I set up three bowls.  One bowl with the melted chocolate, one with the maple glaze, and one with the bacon crumbs.  As my daughter and I glazed the doughnuts and my husband sprinkled the top with the bacon, we would place them on a rack.  Underneath the rack, I placed sheets of aluminum foil to catch the drips.  Under the High Chair also has a great sounding coffee glaze on her site that you may want to try.  Let me know how it goes!

30 thoughts on “If Han Solo Were a Doughnut…”