After a 10 hour excursion to the movies Saturday, I woke up on Sunday feeling like I owed my family a great big “Thank you” for letting me go AWOL. I was sure making a good, stick-to-your-ribs Sunday breakfast was a nice way to start. I was thinking hashbrowns, bacon and eggs but maybe not quite so greasy, and after a little research, found these fairly healthy Cooking Light Muffin Cup Frittatas and knew that I had landed on the right recipe. They are stuffed with crumbled bacon, sauteed diced potatoes and peppers (in a little bacon grease!), and are topped with a smattering of grated cheddar. 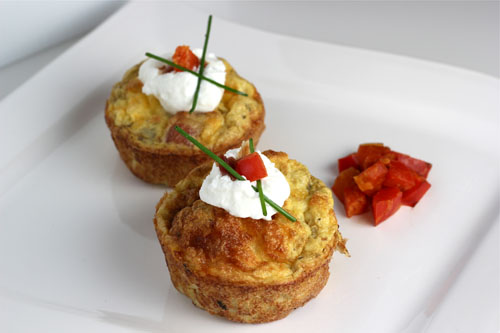 These would be a perfect “Thank you” to my daughter, Zoie, who had helped me out of a bind. That’s what happens when you have teenagers. They come to your rescue now and then. Don’t believe all of the bad press; teenagers may be a little moody and hormone crazed, but in my case they also happen to be wonderful.

The problem was, I had gotten my dates mixed up for my big movie extravaganza day where I was going to a theater “festival” with one of my best friends to watch  four out of nine of the Best Picture nominees. I had been looking forward to it for a month, but then somehow I woke up and forgot that this was the magical day and once my friend reminded me, I was frantically scurrying about my kitchen throwing snacks together. 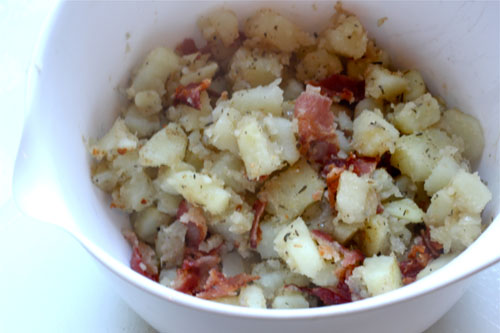 I had pictured this day quite differently and had planned on making some nice little gourmet sandwiches and having French Lemonade to sip but then in typical Geni fashion, I was running late and just throwing together whatever we had lying around; peanuts, pistachios, chocolate covered pomegranate seeds and pretzels were what I could come up with, but no makings for lunch.

There was not going to be a lunch break during our 10 hour movie fest but only a 45 minute dinner break. The idea of hotdogs and nachos was starting to plague me as I raced upstairs to grab my purse. As I walked back into the kitchen, I found Zoie adding to my snack bags, putting a few napkins in and scrunching up the brown paper sacks so they would fit inside my ginormous purse. I felt a sweet pang as I realized that my daughter was taking care of me.

Just before I ran out the door, she shouted out, “Bring Advil and tissues! You get headaches at the movies and sometimes you cry.”  How does it go from buttoning up her sweater and stuffing her lunchbox to her packing my lunch and making sure I had everything I needed?

Later,  when I broke into my snack bag (all of 5 minutes into movie one), I found some surprise Gummi Bears added to my nuts and pretzels. Jackpot!  Then during movie number two, I found the good stuff; crackers slathered with peanut butter.  That’s when I needed the tissue; although the movie was a real tear-jerker, my tears came when I found the crackers.

For Garnishes: chopped chives and a teaspoon of nonfat Greek Yogurt. OR if you are making them as appetizers, top with salmon roe on top of the Greek Yogurt instead of bacon crumbles. Oh yeah.

To make the Frittatas: Preheat your oven to 375 degrees Fahrenheit. Spray the heck out of a regular muffin pan. The reviewers from Cooking Light said that they had trouble getting them out of the pan. I did not since I heeded their warning. This recipe makes about 14-16 so if you have another muffin pan, spray a few more muffin spaces on the second one and cook the two trays at the same time; otherwise you may have to wait to make a second batch.

Peel and dice your potatoes so you they are small cubes. Place your potatoes in a small pot and add water to just barely cover the potatoes. Add a shake or two of salt to your water. Bring to a boil and cook until almost tender but not too tender since they will cook in the oven a little more later. Drain and run cold water over them when done to stop the cooking process. Reserve potatoes and set aside.

Throw your 1/2 of onion in a food processor if you are lazy like me or chop by hand in a fine dice if you need a good cry. Chop your red pepper as well. Everything should have a nice, fine dice but not be mushy or tiny.

Cook your bacon in a frying pan and dry the grease off of your bacon by rolling them in paper towels. In a saute pan, pour about 2 T. of the bacon grease into it. Turn your burner on medium-high and once the pan is hot toss in your onions. Saute onions for about a minute and then add the potatoes and red peppers. Throw in your thyme, salt and pepper. Saute until a little golden (about another minute or so). Crumble your cooled bacon into the potato mixture. To cool my potatoes, I put them in a bowl so that they didn’t stay hot in the pan. I knew I would be adding them to eggs and i didn’t want the eggs to curdle.

Beat the egg beaters and three eggs together in a medium mixing bowl. Add a pinch of salt and a few grinds of fresh pepper like you would to scrambled eggs.  Add the potato mixture and stir to combine well. Using an ice cream scoop fill each muffin cup 2/3 full. They will rise. Make sure to wipe off any spillage that occurred on the pan before you put the pan in the oven. The egg drippings would burn easily. I even wiped the top of my pan with a paper towel which had been doused in a little cooking spray to ensure the frittatas wouldn’t stick to the top of the pan should they spill over the rim. Top each uncooked frittata with a large pinch of the cheddar cheese (about a Tablespoon). Cook for about 16 minutes or until golden and firm.

Serve with a dollop of Nonfat Greek yogurt, more crumbled bacon and some chopped chives. These make a great brunch item that is easily served and hand held if need be. Cooking Light suggests these as mini-muffins and to serve as appetizers. I would top them with salmon roe for apps. 🙂

43 thoughts on “Role Reversal and Bacon and Potato Mini Frittatas”